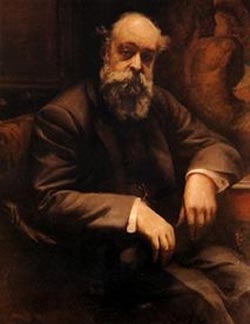 Palace built in Barcelona between 1886 and 1888 for the Count Eusebio Güel and his family.
The Count Güell, patron and lifetime friend of Gaudi, was an industrialist who commissioned him with a good numbers of works and helped Gaudi to gain prestige among Barcelona circles - Finca Güell, Park Güell, Colonia Güell.

This was the first large-scale work by Gaudi to clearly manifest the search for new ideas in construction as well as a totally personal, innovative interpretation of historical styles, with Moorish elements.
The building is centered on a grand vertical space crowned by a large parabolic dome with star-shaped windows. The others areas: salons, corridors, living rooms are organized around this space which constitutes the main salon.

The luxurious interior decoration is magnificent compendium of the taste of the time- marble columns, ceilings paneled in precious woods, elaborate iron work, incredible stained glass windows, paintings and astounding furniture.
On the roof we can see eighteen chimneys in various suggestive forms covered with broken pieces of ceramics. UNESCO classified the Güell Palace as World Heritage in 1984.

The last restoration (1982-2002) was very criticized. Directed by Barcelona City Hall historic preservation agency architect Antonio Gonzalez Moreno: additions and inventions of the restorers of Diputacion of Barcelona as usual a non-observance of the original work of Gaudi.

Wherever Mr. Gonzalez has been involved in restoring Gaudi's buildings, he has given free rein to his own ideas instead of respecting the original design. For example, this bureaucrat commissioned works from contemporary artists for the terrace roof of Palacio Güell, destroying Gaudi's original work of art.